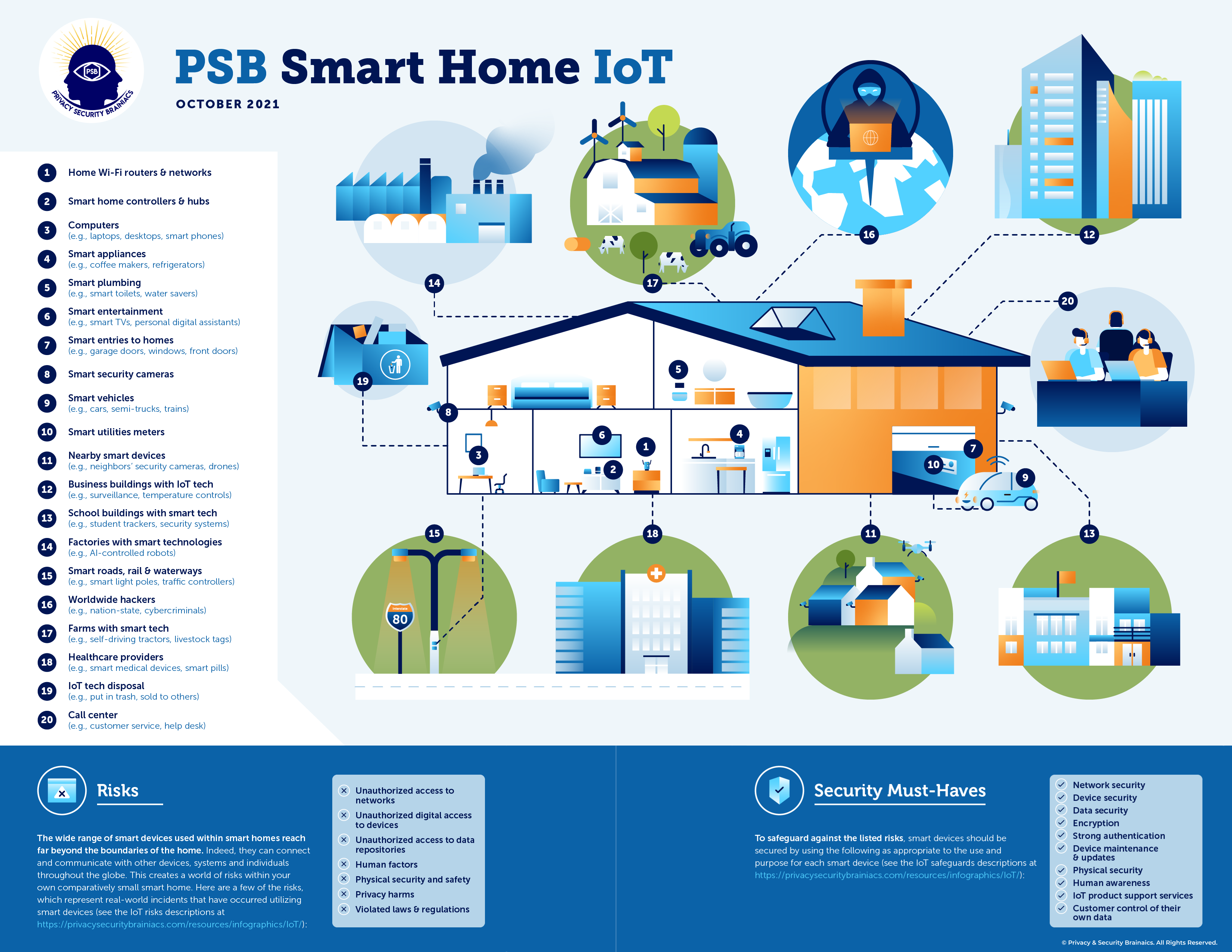 Cybersecurity for Grandparents (And Everyone Else!): Q4 2021 3-Volume Set of Flipbooks

Volume 5: Securing IoT On the Go

See the Privacy & Security Brainiacs page dedicated to IoT news for a wide range of past and current real-life examples here: https://privacysecuritybrainiacs.com/resources/news/IoT

Each environment where IoT products are used needs to have risk mitigation controls implemented as appropriate to the associated digital ecosystem to most effectively mitigate the most cybersecurity and privacy risks. However, most consumers, and businesses with no IoT product cybersecurity or privacy experts on staff or contract, simply aren’t aware of how to determine these risks.

We are here to help you most securely implement and use your IoT products!

Here is a list of common types of risks, as shown in the PSB Smart Home IoT infographic, and associated examples. Below the risks is a list of key security actions and tools, listed in the PSB Smart Home IoT infographic, that can be implemented to significantly improve cybersecurity and privacy protections to dramatically mitigate the risks. These are not comprehensive lists possible risks and associated security must-have mitigations to take. However, if time is taken to implement even just one or two security and/or privacy controls, these would be the ones we’d recommend you take. Of course, we hope you would then consider implementing more security must-haves, to more comprehensively protect your IoT products and connected networks, along with protecting your privacy.

The following risk descriptions and examples supplement the information within the PSB Smart Home IoT Infographic, providing just a few real-life examples of how weakly secured IoT products have created risks that were exploited by cyber criminals, snoops, and others. Many more details can be found in our book, “Cybersecurity for Grandparents (And Everyone Else!): Q4 2021 – IoT Security and Privacy,” which will be published by the end of November, 2021.

Many more details can be found in our book, “Cybersecurity for Grandparents (And Everyone Else!): Q4 2021 – IoT Security and Privacy,” which will be published by the end of November, 2021.

Privacy & Security Brainiacs offers a wide range of security and privacy training, tools and consulting. We are also happy to work with you directly to help you better understand how to use these types of security and privacy controls. If you need more information, or help, please get in touch with us using: info@privacysecuritybrainiacs.com

IoT Security and Privacy Videos: Will be published in November, 2021! Check back, or request notification from: info@privacysecuritybrainiacs.com